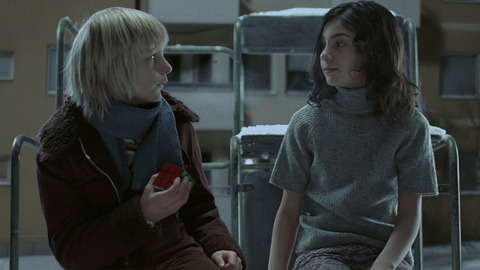 Vampire movies suck – even my pun is annoying. Our modern day kaleidoscope of Hollywood movie releases involves way too many vampire movies with angsty teenagers, flippant dialogue and excessive CGI. At least, in my opinion. Go back only a couple of decades and another extreme is at play – boring tropes of crosses, bats, velvet and garlic. And yet, this recent rash of Twilight melodrama has had me begging for some good old fashioned goth. That is, until I saw Let The Right One In.

Set in the cool blue back drop of Sweden’s winter, this masterfully directed drama quietly and profoundly sets the stage for what all vampire movies should aspire to. At the helm are two young adults that never once longingly stare at the camera, or evoke the heroine chic of a Gucci ad. Maturely handled by two very young and very pale leads, Kåre Hedebrant portrays Oskar a boy who is bullied at school and struggling to deal with his parents’ recent divorce at home, and Lina Leandersson as Eli, is a disheveled and unusual little girl who in stark contrast to Oskar’s angelically blond hair, has the hair of a raven and a feverish countenance to match. The loneliness of both of these children is palpable and is perhaps what makes the relationship that unfolds between them so entirely compelling and satisfying.

What I loved about this movie is that it is not excessively stylized and trendy, nor overtly draconian and Gothic – as vampire movies tend to be. It doesn’t need to be – this movie relies on the simplicity of coming of age themes to invoke powerful emotions. A wonderful balance is struck between the flowering of young love and the stark reality of the protagonists’ environment.

Fans of gore need not look elsewhere. This is not a purely artistic melodrama – the violence is gripping and unforgiving. But, it is measured, and perfectly peppered with the menace of the gang that torments Oskar and the dire and incessant need for Eli to feed – this movie sweeps you away into a world that is stark and cold but also tender and hopeful.

Most importantly, it delivers a sentiment that all of these would be vampire love stories may clumsily attempt but always fail to convey… the fear of being alone.