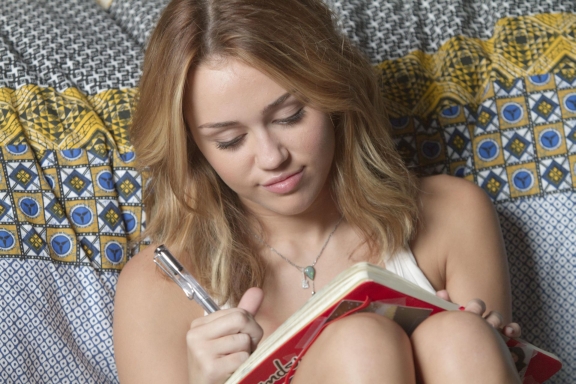 Those of you who listen to See You Next Wednesday may already be aware of my feelings for this very special movie. If you haven’t heard it, strap in, this is going to get weird. My intent here is not to lay the whole movie out for you, but rather to highlight a few key moments that make this one of the weirdest, creepiest movies ever targeted at impressionable kids.

LOL is the 2012 remake of a 2008 French film by the same name. Both were directed by Lisa Azuelos and written by her and Nans Delgado – both of whom should be ashamed of themselves.

The movie starts out harmlessly enough. We open in front of a high school and are introduced to the main characters via narrative courtesy of our protagonist, Lola (Miley Cyrus at her vapid best). First we meet two of Lola’s friends: Janice (who is quickly relegated to the background and whose attendance in this film is entirely superfluous), and Emily, whose sole defining characteristic is that she is blonde. We meet Chad, Lola’s soon-to-be ex-boyfriend. Chad is a musician with feminine good looks, perfect hair and the deadest of eyes. Lola and Chad break up when he confesses to her that he hooked up with a girl that summer at camp. Lola is totally heartbroken, you guys, OMG.

“Like, ohmigod, you’re so right about Metal Machine Music, Kyle – I can like, totally hear the sonic allusions to Ludwig van Beethoven and John Cale.”

She runs to Kyle, who is her best friend. Kyle is also a musician, in the same ‘indie’ band as Chad. The band is called No Shampoo. I think this is meant to be a winking commentary on the unwashed nature of indie musicians, and is therefore super fucking hilarious. The final player in this festival of shit is Wen. He is the stock, oversexed nerd who tries to fuck everybody but can’t because he wears Dwayne Wayne glasses and talks like a mental patient. He also wears a Flipper t shirt, because Miley Cyrus’ friends DEFINITELY listen to Flipper. There’s also a slutty girl whom everyone calls ‘the post-it note’ because ‘she sticks to everyone’. You know, like a post-it note.

Lola has a close relationship with her mom (Demi Moore) because mom is as delightfully quirky and youthful as daughter (albeit in a much more desperate, histrionic way). They sing Rolling Stones songs together, bathe together, question each other’s pubic area grooming choices – it’s a good time.

Kyle, however, doesn’t have it so good. His dad is a one dimensional, needlessly grumpy motherfucker (!) who is not happy with Kyle’s grades. He threatens to not let him participate in the battle of the bands if his grades don’t improve immediately.

Let’s check in on Emily the Blonde Girl’s family. Her mom (Nora Dunn, who is as one dimensionally bitchy as Kyle’s dad) is looking for the chicken she is making for dinner that night. Where the heck is it? Why, Emily has it in her room, of course! What the heck is she doing with it? Well, this is where things get, um, weird. Emily is on Chat Roulette (or the cinematic off-brand equivalent) with a stranger we later find out is Wen, the school loser. She is sliding her webcam in and out of the chicken. To simulate her vagina. She is pretending to fuck herself with her webcam for the sexual gratification of a stranger on the internet. Is that what kids do these days? Or is that just what French kids do these days? Either way I don’t want to live anymore.

There are a few other ‘plot points’ that occur; Lola has a party, Demi meets Jay Hernandez and falls in love with him, Lola and her best friend Kyle decide to become bf/gf. At one point Demi is having a dinner party with a few of her friends, including Fisher Fucking Stevens and Gina Gershon who play husband and wife. They are having a conversation about the fleeting nature of relationships. Gina Gershon assures Demi that it’s better to be alone, and the conversation goes a bit like this:

Gina: At least you don’t have someone farting beside you in bed!
Fisher: You used to love my farts!
Gina: I was lying.

Okay, wait. At some point at the beginning of their relationship they must have had a conversation that went like this:

Fisher: Oh, excuse me, I farted. I’m so embarrassed!
Gina: Mmmmmm, don’t be, I love it. Do it again…

This is obviously speculation on my part but I feel it’s probably pretty accurate.

Anyway, throughout the film the kids are gearing up to take a school trip to Paris. When they get there they meet their host families who serve brains and snails for dinner, I assume to illustrate the fact that France is gross. One of the other boys, who I think is named David, is paired up with a family whose daughter a) falls in love with him instantly and b) has Down’s syndrome. He is quite taken aback and immediately repelled by this girl. This is all played for laughs, by the way.

One night, while they are getting ready for bed, the kids switch the sleeping arrangements around so that Lola and Kyle can finally fuck. This puts David in a room with the daughter with Down’s syndrome. She is putting the moves on hard and he is resisting. Finally she reaches her hand out tenderly, slowly… David reaches back, their hands meet, they look into each other’s eyes… and the scene ends. Did David take advantage of a girl with Down’s syndrome? We’ll never know for sure, but within the reality of this movie it’s not only possible, but probable.

They get back to America and the whole thing culminates in a battle of the bands that No Shampoo obviously wins. Kyle’s dad shows up in the audience and learns that sometimes grades aren’t as important as the power of bullshit pop music.

By the end everyone has learned a lesson they’ll never forget. Some people learned how to love, some got their hearts broken, some people got their chickens fucked, and some may or may not have sexually assaulted the disabled.

I guess that’s what you call growing up.