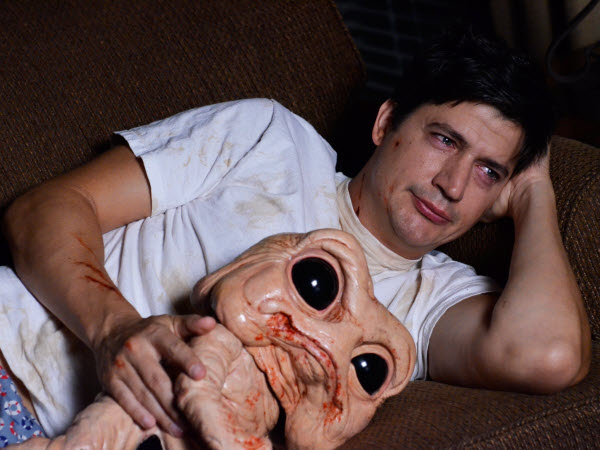 Jacob Vaughan‘s Bad Milo! aspires to be a grue-soaked update of Gremlins with Troma-esque over-the-top juvenile spirit, but crumbles beneath the weight of its shockingly lazy, puerile and empty script.

Ken Marino stars as Ken, a stressed out office worker with intense stomach pains that seem to be getting worse by the day. After a trip to the doctor reveals what looks to be a polyp, Ken is directed to stop all stressful activities until the growth can be removed. Unfortunately for Ken, his work life closely resembles the movie Office Space and his desk is moved into an abandoned washroom. At home, his wife Sarah (Gillian Jacobs) drops hints that she’s ready for a child, much to Ken’s chagrin. As the pressure mounts, Ken realizes he has more than just gastrointestinal issues – his problem is actually a murderous demon living up his butt who emerges to kill his sources of stress. With the help of his therapist Highsmith (Peter Stormare) he must learn to befriend and control the demon – affectionately nicknamed Milo by Ken himself – before it murders again.

In the hands of the right filmmaker (Frank Henenlotter springs to mind), this concept could certainly fly. There are plenty of opportunities to sell the metaphor that drives the plot, but Benjamin Hayes and Jacob Vaughan’s script has a lot less on its mind. Having seen the trailer for Bad Milo!, I was worried that the film would focus too much on the base humour at play here, and that’s exactly what it does.

Despite having a stacked supporting cast featuring Kumail Nanjiani, Stephen Root, Mary Kay Place and more, nobody is given any real character work to sink their teeth into. In scene after scene, the cast struggles to make the script’s set-ups funny by way of improv work. For example, a dinner scene earlier in the film features Kumail Nanjiani as Bobbi, who is dating Ken’s mother Beatrice (Mary Kay Place). The joke here, you see, is that Bobbi is much younger than Beatrice, and they’re open about their sex life. How awkward for Ken, right? The already weak joke is beat into the ground over and over again throughout the seemingly endless scene, as Kumail and Mary Kay do their best to sell the gag. It’s futile though, when the foundation of the scene barely elicits a chuckle to begin with.

The design of Milo – looking like a skinned Mogwai by way of E.T. – is quite effective. It’s expressive eyes lend a fair amount of emotion to the demon, and the emphasis on puppetry over CGI is entirely welcome. Ken Marino is best when he’s forced to befriend and even be tender towards his demon, as he is the only character who has any depth to work with. These scenes only reveal what makes Bad Milo! so disappointing, as there is clearly promise in the idea of Ken Marino bonding with his inner demon – literally.

When the film eventually shifts into action mode and subsequently the dramatic finale, it’s too little too late. You know you’re in trouble when the funniest joke in your movie is the re-occuring gag of news reports blaming Milo’s murders on a rash of random raccoon attacks. Once you’ve seen Ken on the toilet once, as Milo crawls in and out of his anus – overdubbed by fart noises – you’ve seen all that Bad Milo! has to offer. The film is almost relentless in the bludgeoning of its central joke over and over again. I’m as big a fan as any of well timed and placed juvenile laughs, but such humour should also serve a purpose – especially when your entire film hangs upon it.