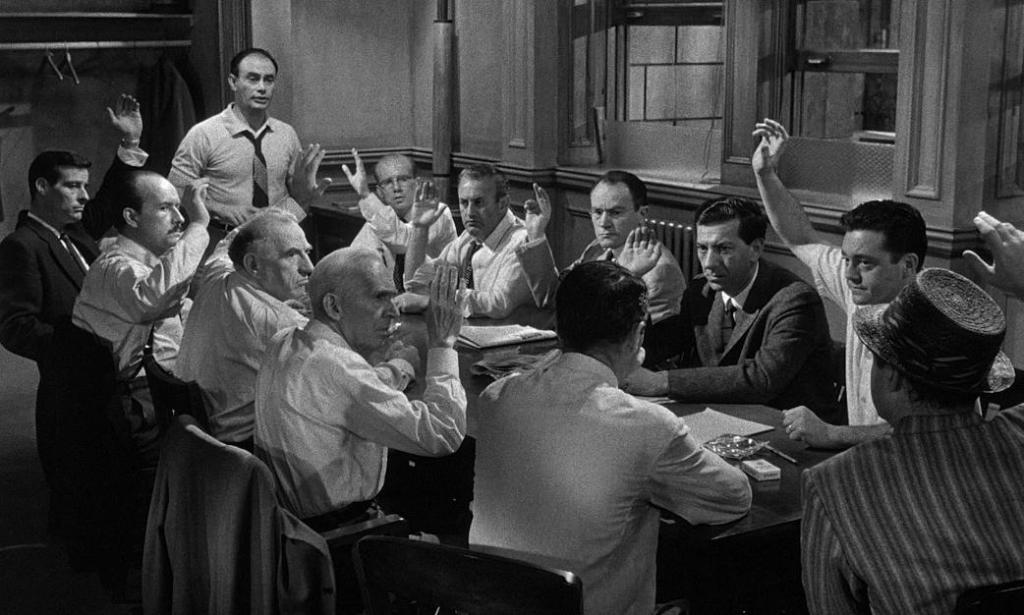 Most of us have an ongoing mental bucket list of classic movies that we intend to eventually watch – for me one of those movies was 12 Angry Men. Straight away, I would like to say that if you have not seen this film, you absolutely must. Immediately.

Let me set the stage for you: it is a sweltering hot day in the late ‘50s, presumably in the summer of 1957. The scene opens up to a courtroom where the defense and the prosecution have rested, in a case where a young man of 18, a boy really, is on trial for the murder of his father. The 12 men of the jury shuffle into the jury room to decide this boy’s fate. Apart from the opening courtroom scene, the entire film takes place in the small enclosed space of the jury room, but what is to come is anything but small.

Once the formalities and small talk is over (which although brief, immediately illustrates the strength of the screenplay and the perfection of the cast of characters), the jurors decide to do a preliminary vote to get an idea where everyone’s head is at. The result? 11 guilty, 1 not guilty. What unfolds is a directorial masterpiece and a quality of performance that is almost unparalleled. This movie has single-handedly put Henry Fonda on the top of my list of actors, with Lee J. Cobb right at his heels. In watching this film, I was reminded why the word thespian is all but a whisper these days – rarely used and almost entirely misunderstood. The etymology of the word is quite literally “inspired by the Gods”, and without being too melodramatic, this film truly is inspirational.

Director Sidney Lumet utilizes the small and bare room to his advantage in constructing a suffocating atmosphere. While the camera hovers over the entire room in the commencement of the film, gradually the lens changes and closes in on the characters, creating a feeling of suffocation and tension. The subject matter is such that it allows every actor to truly sculpt their individual character; how that relates to the overarching themes of class, politics, racial divides, logic and morality is exquisitely executed by everyone in this movie.

Henry Fonda, as the lead and moral compass of this picture is absolutely superb. He conveys everything you need to know in his gentle tone and expressive eyes, almost putting you in a trance. Conversely, the brusqueness and simmering rage of Lee J. Cobbs’ character serves as the antithesis to this emotion, creating an almost teeter totter like effect, which the remaining cast accentuates in  inhabiting one end of the spectrum or the other throughout the development of the story.

In my opinion, black and white photography is integral to the telling of this piece, in that it exemplifies the time period and bolsters the character development and plot in its simplicity and elegance. In fact, any colour would be a distraction and would work counter to the sobriety of the subject matter.

The closing scene is so silent that it roars. It begs for the viewer to be thoughtful and contemplative. Too often, contemporary movie makers rely on over-the-top twists and garish manipulation to keep the viewer interested, or to forcibly extract shock and awe, instead of accepting that the viewer brings their intellect, humanity and imagination to the experience.

I cannot stress enough the importance and quality of this motion picture. I highly recommend it to anyone who is a fan of Criterion Collection films, or quite simply wants to observe an excellent piece of work by one of the greatest directors of our time. In my estimation, 12 Angry Men is virtually flawless.

Versus: Van Damme vs. Seagal at TIFF Bell Lightbox