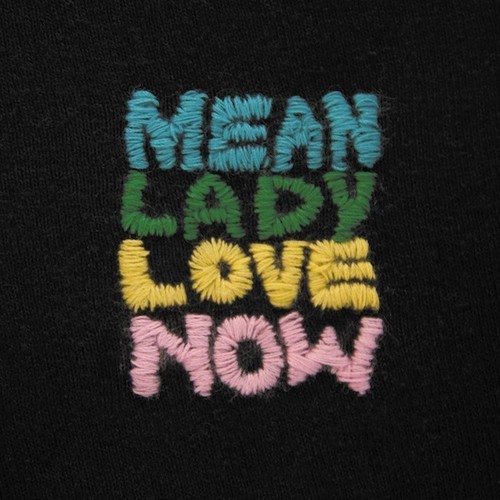 Mean Lady‘s debut album Love Now (Fat Possum Records) bursts with playful pop songs driven by head-nodding beats and wall-of-sound production value. Early on the record, one of the first comparisons my ears made – and stay with me here – was that of Lily Allen. I’ll be the first to stand up and admit that I have a very big soft spot for Lily’s music – especially her second album. While Lily Allen’s music might not be the first thing that springs to mind when you think of lightly psychedelic pop music, Mean Lady’s vocalist Katie Dill similarly knows her way around a pop hook or two – and like Lilly, is willing to subtly jump from one genre-influence to the next freely between tracks. Providing the backing here is Sam Nobles – resident multi-instrumentalist and producer whose hip-hop tinged beats canoodle with staccato piano riffs, arpeggio keyboard flourishes and dub-influenced production treats.

Take “Far Away”, the second song on Love Now. It begins with a classical sounding piano riff and distant bell shakes, before an organic-yet-programmed drum beat introduces itself to the track, sliding in right under the bass-line. Love Now is full of these retro-meets-modern touches that – while certainly are not groundbreaking – are executed in a way that can gel perfectly when coupled with Katie Dill’s soulful vocal performances. On “Mother Earth” Dill alternates between singing “I’m going through changes / some re-arrangements / but not everything / the world surrounds me / my love astounds me / it’s all everything.” and chanting along with 60s-pop la-la-la‘s. Noble’s reverberating guitar and rhythmic stop-start moments make what could have been a lyrically simplistic, transitional track into something altogether special.

The plucked acoustic guitar that opens “Bop Bop” might have you expecting a cliche mid-album ballad, but after a minute and a half Noble’s familiar back-beat kicks in – Dill coolly sings “Now I’m starting to realize I’m on my own / Now I’m trying to forget how I felt at home / in your arms” and the song opens up. When the song doubles-back to the chorus, this time Dill’s voice has a tinge of over-modulation and the same few lines seem to take on all new meanings. These small but still unexpected moments have had me returning to some of these tracks again and again in the past week.

Not everything on Love Now works this well though – Mean Lady dip a little too far into reggae (an issue that crops up once or twice throughout the LP, personally) on the album’s center piece “Why’d’ya Hafta Be Sucha?”. Here, the repetition of the lyrics and slightly stagnant structure of the track might pass you by without eliciting much more than a shrug. Where these elements work better, are on tracks like “Pony Ony O” – the album’s longest track at over nine minutes. One might think the extended length would only result in Mean Lady meandering, but the fleshed out track takes time to build and introduce its melodic phrases before fully engulfing them in Noble’s instrumentals. It’s an absolutely wonderful crossroads of psychedelic experimentation and pop hooks that fully balances both elements without ever tipping too far on either side – reminding me especially of Beach House at their best moments.

As I said, Mean Lady’s Love Now isn’t fully breaking any new ground, but the elements for a wholly satisfying summer album are all here; an incredible voice, lyrics of love lost and found (both of the future, and the past), and eclectic, sun-baked instruments and rhythms. Love Now is like a great summer cocktail – if you sip on it too much, it might give you a headache. But when the moment strikes you, there might not be a better way to spend an afternoon.