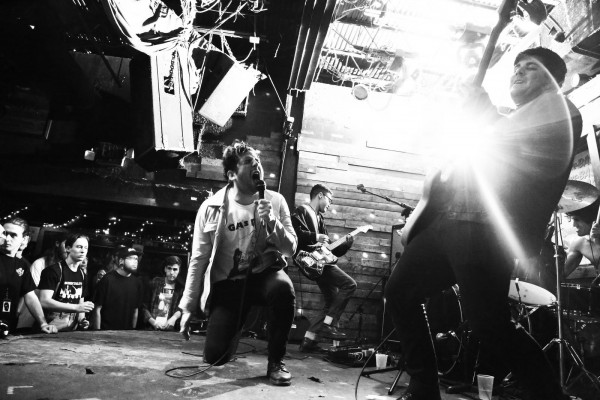 Direct Effect‘s Twitter Bio says nothing aside from “grungey hardcore weed rock”, and meanwhile in the fuse-blowing video for “[ ]”, one of the first things shown is their singer casually smoking weed out of his pipe. With this emphasis on pot-consumption, you might think Direct Effect will sound like a rambling, sludge influenced metal band, but in actuality Sunburn explodes out of the gates as one of the best hardcore-punk albums of the year so far – and I’d even wager that it’ll be tough to beat come year-end list season.

Sunburn‘s sound lands somewhere smack-dab in the middle of retro-hardcore heroics and the noise-indie throwback scene that has been so popular in the past few years. One listen to Sunburn and it will come as no surprise as to why bands like Fucked Up, Pissed Jeans, and Metz are the go-to reference points when describing Direct Effect. Much like Fucked Up, the band is not content to blast out 1-minute rage-fests that go straight from point-a to point-b, but rather pepper their still-brief song-lengths with enough twists, turns and tempo change-ups to make sure Sunburn doesn’t feel repetitious. Sure, the half-hour album whizzes by pretty quickly, but it’s the kind of energetic album that you can listen to back-to-back – and in fact, that’s exactly what I did on my first go-through with Sunburn.

“[ ]” jumps from a heavy, fuzz-bass driven indie-rock song to blistering hardcore with ease and tact, all before a blast-beat break-down makes sure that nary a head will be left un-banged. The title track achieves a similar feat in barely over a minute, stopping halfway through and dialing down into a half-time noise-rock freak out. To my earlier point, none of this feels sloppy – the band doesn’t just drop in and out of their stylistic influences whenever they see fit, it all feels deftly orchestrated in the best possible way – and without sacrificing the unpredictable nature of the record at all. You truly feel like you’re in good hands when these songs careen wildly off the rails, only to hop back at the drop of a snare-roll.

By the time “Thoughts of Honey” comes to it’s cacophonous conclusion – sounding like the band members have finally exerted their last amount of energy and just collapsed on the floor – it’s clear how powerful an experience listening to Sunburn is. This is raw, unfiltered attitude pressed to vinyl. Any fan of hardcore music or the aforementioned bands need to get on Sunburn when it is released on March 11th. And speaking of, Tiny Engines is taking pre-orders for the vinyl – including limited edition runs of white, opaque purple, and clear records. I’ve already snagged my pre-order, so you should get on it before the rest of ’em sell out.

And you can be sure they will, as word spreads about how ear-pummelingly great this record is.