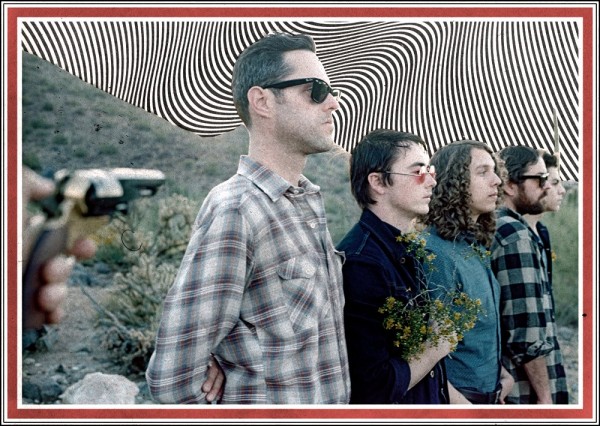 Disclaimer #1: I have had the good fortune of seeing Destruction Unit three times in Toronto (although I missed the S.H.I.B.G.B.’s show which was, by all accounts, an absolute burner.) Each time, I have watched them play to crowds smaller than their US counterparts – Canada (or at least Toronto) just doesn’t seem to get it, thus this well after-the-fact review. On two of these occasions I have chatted with Rusty Rousseau (the bassist) and done a spectacular job of geeking out and (likely) boring him. It is fair to say that they are the band that has had the most profound impact on my own music and writing, with perhaps the exception of Sonic Youth.

Disclaimer #2: I wrote this walking around in the summer heat with a storming hangover and the record on repeat which is, I can only assume, how Destruction Unit intended it to be listened to.

If I squint I can still see them, in the distance. Five lean, shadowy bodies, built out of sand, leather and noise, bound to an indecipherable cause. Five ghosts.

The record in question, Deep Trip, lurks and slithers about like some nameless evil, peering in our windows for its next meal.

It is the sound of our collective discontent-this deep trip-our unease: siphoned from our televisions, our fm radio, (and the all-encompassing 24 hour snarl of modern life) and spit back into our faces like spoilt milk. A reckless, violent sound. The tinnital scream of some terrible appliance, the hummingbird thrum of the bacchanal as it passes the tipping point: teeth bared, eyes wild. Where did this sound come from? Sometimes, given the current climate of contemporary pop music it’s hard to imagine that a band such as this could experience even the slightest glimmer of success. Or is it altogether predictable? That the more fabricated and plastic (brittle) pop music becomes, the more vehement the reactive counter-movement?

It is not head music.

It is a whoomp of solid air rushing into, by, and through you, your cells vibrating and merging, expanding and collapsing with each moment, air ahead of the subway as it enters the station.

“This is how you actually look.” they say. It is a cruel mirror, cracked and blemished, but pure of image and representation. And when they intone “…and we’re Destruction Unit” it is not an affirmation, it is a reminder that we, too, could be Destruction Unit, if only we would see things as they are: crooked and neon and wind-blown and overturned. If only we could surrender our bodies to the void, their void, their wall of riotous sound.

This is head music.

Traffic. Radio voices with the bass too high. Air-conditioning compressors. Laughter. Ubiquitous iPhone text tones in the movie theatre. The constant headache. The unending phosphorescent blur of a perpetual, long exposure life, twisting and writhing in a sexual, narcotic, panic around us.

A deficit of detail both lyrical and otherwise-the voice is a tree groaning against the wind, words wilfully obscured by a haze and a smog not typically observed in the Sonoran desert.

There are moments of sheer, car-crash disbelief: the “oh shit this isn’t happening” nervous kick. There is the gaping, threatening maw of their three-pronged, twin reverb attack. The constant fisticuff downstroke of the snare. Songs in a fever, written by (and for) the wolves.

They are without peers, this gang. Their drugs work wonders, miracles. It is a new occult. As I listen, every time I listen, I feel the same sunburnt nausea of too much alcohol at an amusement park. They feel impermanent and immortal at the same time. And as this system crumbles and fades, as this light fails us, as our bodies and this world fails us, sputtering, coughing, and spitting, they are still here. They remain, these ghosts.