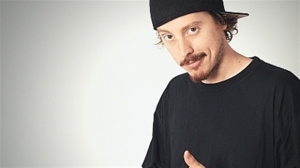 In anticipation of our upcoming episode of Time Bandits featuring the one and only Timbuktu, check out this list of five Canadian rap albums that you should definitely have in your collection!

As an added bonus, Timbuktu appears on every single one. How about that!? Let’s get started:

Of course, we have to start things off with Teenburger – a collabo’ between Timbuktu, Ghettosocks and DJ Jorun Bombay. It may be a given that a lot of Canadian rappers are pop-culture obsessed, but it’s quite possible that no one pulls off the culture-bouillabaisse better than Teenburger do on their 2011 album Burgertime.

From the Ferris Beuler-inspired skits, to the impeccable production featuring a plethora of teen film samples and liberal doses of unreal rhymes, this album is the goddamn real deal.

Speaking of pop-culture, Wordburglar‘s album 3rdburglar from 2012 should follow-up your time with Teenburger nicely. Here, oodles of clever rhymes and G.I Joe references rub elbows with head-nodding beats and samples from The Burbs.

In addition to being a rap legend and one of the best dudes in the game to follow on Twitter, Jesse Dangerously is – much like the title implies – Humble & Brilliant.

His intensely speedy delivery may astound, but when he slows down you’ll be just as impressed with his ability to balance the referential with the introspective and academic – as seen on the album-closing triptych.

Plus, he’s got a song called “file_id.diz” – I mean, come on, that’s incredible.

The first time I heard More or Les was on The Herbaliser‘s album Same As It Never Was. I was instantly hooked, so of course when Brunch With a Vengeance dropped, I was all over that.

Featuring guest spots from The Mighty Rhino and The Airborne Quartet, it’s as stylistically varied an album as it is cohesive and thoroughly enjoyable.

Finally, why not wrap the list up with an album that brings everyone together under one roof?

Here’s just a few reasons to listen to this record: Fresh Kils, Ghettosocks, Chokeules, Thesis Sahib… and that’s not even close to a full list of the amazing members of the Backburner crew. One of the most stacked hip-hop records out of Canada in the past few years, front-to-back, Heatwave just oozes fun.

Plus, rumour has it, there might be another Heatwave on the horizon. Shh!

Okay, I know I said five albums, but you can’t make a list of albums featuring Timbuktu (here performing alongside Chokeules and Savilion) without including the b-movie themed record Creature Feature from Swamp Thing. If you miss Halloween already, here’s the album for you.