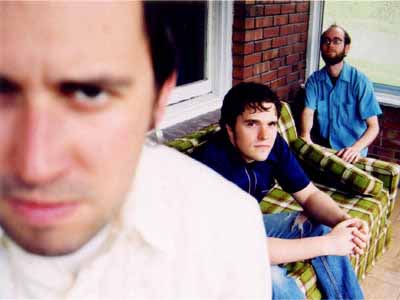 Waxing Nostalgic is an ongoing series of articles shedding light on albums and bands from our past, that may have gone unappreciated and overlooked for too long.

In 2009, the New York band Cymbals Eat Guitars released their debut album Why There Are Mountains – an amalgamation of early 90’s indie-rock and punk, played with intricacy over long-form structures seemingly lifted from a post-rock record. I absolutely loved it, but one thought I just couldn’t push out of my mind when hearing it for the first time was: “This sounds a lot like The ‘89 Cubs to me”.

The ‘89 Cubs are a super-group of sorts, formed by members of bands like The Good Life, Desaparecidos, and Bright Eyes; I guess they got tired of backing Tim Kasher and Conor Oberst full time? The result was a grand slam (I had to!) with the trio’s 2004 debut There Are Giants in the Earth on Slowdance Records. Again, the album’s overall sound can be described as firmly rooted in the punk, pop, and indie-rock genres – the difference being that they’ve stretched a handful of these songs past the 4 and 5 minute marks and injected a bevvy of tempo switch-ups, textural noise freak-outs and spazz-rock outbursts to the proceedings.

A perfect example would be “Oh, The Things We Put In Our Heads”. It chugs along on little more than plucked and bent guitar lines, backed by bubbling textures and plodding drums. Ryan Fox lets words fall out of his mouth like he could give no fuck about enunciation. “The way we pour stiff drinks / the way we fall for our dreams / The things we put in our heads.” But give the song a few minutes, let it gain speed and you’ll be presented with a final minute that totally and completely rocks the hell out – it’s cathartic in the same way that some of the best post-rock can be.

Yet, “How To Prepare For Death” and “We Won The Party” are both short and to the point; the latter even incorporates a Fugazi-like fury into its barely-two-minute run time. As the former track’s finale explodes to a chorus of children booing the band, it segues into “Code of Conduct: Ghost” – where you’ll hear more of There Are Giants in the Earth’s moments of shoegazey-brilliance. From the morse code and bird calls that open “Candid Flames” through to the Fibonacci sequence finale of “Burn the Boats”, the album has covered so much ground it’s staggering.

Which brings us to our problem: I can guarantee you this album is totally underrated because it’s post-rock influences. There Are Giants in the Earth sits perfectly on the fence between being both accessible and immediately catchy, but also dense and ambitious; it tends to let the songs bake for a while, before getting to the goodies. You’ll have to be willing to go along for the ride with an album like this, and if you are willing to go on that ride though, holy crap it is a masterpiece of stunning proportions. I know I liberally pepper my articles about albums from my formative musical years with the term “underrated”, but it would try my patience to think of an album more criminally overlooked as There Are Giants in the Earth – it’s just that good.

Pitchfork‘s review of the album went as far to label The ‘89 Cubs “post-pop-punk”. I don’t think they represent enough pop-punk in their sound to warrant this label, but the intention is not too far off. I know some people familiar with both Cymbals Eat Guitars and The ‘89 Cubs may object to the comparison I’ve given here; it’s true that upon first listen you might not hear a huge similarity on the surface, but I do honestly feel that both bands are attempting a similar feat and showing some shared influences in their music.

Unsurprisingly, some mistook their ambition and refusal to adhere to any single genre as laziness – as one particularly wrongheaded Punknews review claimed that “It’s just boring. It goes nowhere. It’s unobtrusive. It’s safe. It doesn’t cross boundaries.” I’m all for the differing of opinions (and if the album bored this reviewer than so be it), but it’s anything but safe; the crossing of boundaries is practically the modus operandi of the entire album. It quite literally declines play by genre-defined rules for any length of time – more often than not within the same song.

Needless to say, despite a modest amount critical success from those publications that did review the album, The ‘89 Cubs have remained inactive since 2004. One could assume that they have probably fallen back to playing second fiddle in other, more popular touring bands. That’s all fine and good though, because 5 years ago they had one shining moment when they pointed to the sky and proceeded to hit it out of the park with There Are Giants In The Earth. It continues to sound perfect on the instant replay, even to this day.