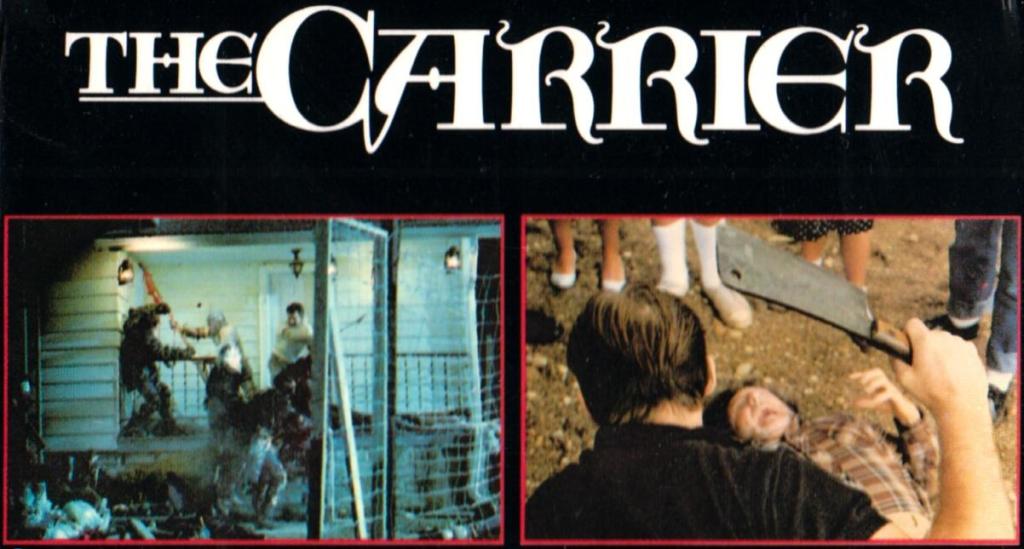 “Sleepy Rock was a place you might find in a fairy tale… until one day, the fairy tale turned grim.”

If you’ve ever wanted to see a movie filled with warring factions of Glad garbage bag-clad townsfolk, murdering each other for kittens, boy do I have the movie for you! The Carrier is an over-ambitious, low-budget thriller film ripped from the pages of Stephen King – well, actually it aspires to be ripped from a page residing somewhere near a Stephen King novel, let’s say.

In the small town of Sleepy Rock, a young man who lives on the outskirts of town has been blamed for setting fire to his house and thus murdering his parents in the process for their land. Of course, this isn’t true, but he is outcast nonetheless – as hysteria and blame travels fast in Sleepy Rock. One night, he is attacked and wounded by some kind of monster, and thus becomes The Carrier of an unknown disease. Now, any object he touches becomes invisibly infected, and any one or thing who then touches that object, well, melts into it. Yeah.

As if this concept isn’t endearingly batty enough for an entire film, when it is discovered that people are melting into Dr. Suess books, the townsfolk rally up and start keeping track of which objects have been infected in order to figure out who the carrier is – they also take to wrapping themselves in plastic to avoid touching anything, which makes any character identification excruciatingly hard at times for us as viewers. When they realize that they can test these objects using animals, they start rallying up local farm cats to use as test objects – and this inspires an all out war for kittens. The town is split into two factions, revealing a classically King-esque Science vs. Religion theme (a la The Mist). If you think the Stephen King comparison is getting tired though, remember that the movie’s doctor who leads the followers of science is actually named Doctor King – I mean come on.

Written and Directed by Nathan J. White – who never went on to write or direct anything else – The Carrier is one of those movies that you are simultaneously befuddled by and engrossed with. The set up is so damn batty, and yet executed with entirely admirable gusto, you just can’t help but wish that White had directed more films. The film is actually quite well shot for the budget, having carried over some crew from Evil Dead II – including Bruce Campbell as sound effects recordist!? The script, while perfunctory, is filled with the kind of bizarre line readings and dialogue that seem beamed down from outer space.

It all adds up to one of the most bizarre movies you will surely see for quite a while, but also one that I would wholly recommend seeking out. How many times in your lifetime do you get to see a movie where people melt into outhouses, infected chairs are tossed as weapons, and evil gang leaders exclaim “CATS OR DEATH!!!?” at each other? It’s an extraordinarily unusual experience.